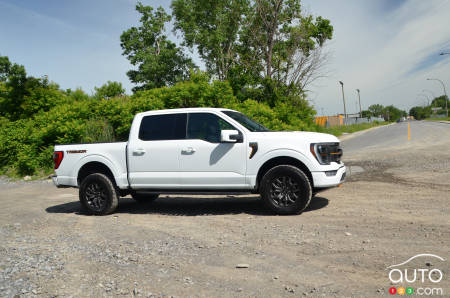 On the Ford roster, those vehicles destined for off-roading adventures and misadventures proudly sport the R on their jerseys, R being for Raptor of course. Just this year, the American auto giant unleashed the Bronco Raptor. But for the majority of folks, the price demanded to access these extreme models is just too high.

Ford is cognizant of this obviously and understands that it should not neglect those buyers who not only have budget considerations, but also might not want or need a monster fitted with huge aggressive tires and suspensions designed to tackle outrageous terrain in the deserts of Utah or California .

Meet the 2022 F-150 Tremor, which elbows its way into the Ford F-150 lineup between the Raptor and the FX4 package available with certain trims. The strategists settled on this recycled nomenclature for use for the first time since 2014. The 2014 Tremor was actually a different beast, designed especially for delivering super-quick acceleration. But since two years ago, the name has been rededicated for use on more-developed variants of the Ranger and the Super duty. The F-150 is the latest model to get such a version.

The problem for us in testing this variant, of course, is that Canada doesn’t really have desert terrain of the type seen in California. On the other hand, we covered enough km at the wheel of the 2022 F-150 Tremor, both on the paved road and off it, to confirm the model’s considerable chops. 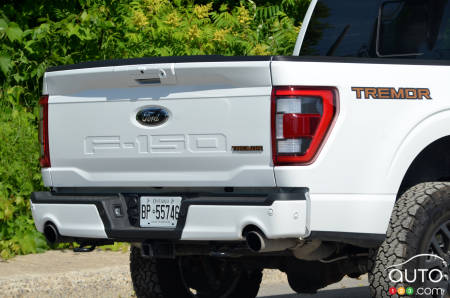 Just jazzy enough!
The Tremor edition is of the school of adventure pickups that doesn’t try to scream its presence to the world. This version of the F-150 stands apart from its brethren via a few visual details, for instance the Active Orange color seen spanning the unique front grille and even reaching into the optical blocs. The two hooks are also decked in that colour, which also makes its way inside at various spots within the cabin.

The hood itself has been reworked and features air vents, while on the flanks, the grills feature the Tremor wording. Fixed footrails, which evoke those on the Raptor, facilitate vehicle entry, without cutting into the truck’s ground clearance. Finally, in back, the bumpers feature dual integrated tubes. You also find Tremor badging back there.

The General Tire Grabber all-terrain tires, meanwhile, add a touch of aggressivity to the exclusive wheels. And since we’re talking about an off-road-ready vehicle, the suspension is raised by one inch in front and one inch and a half in back.