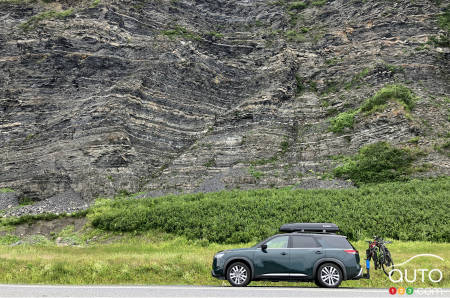 The Nissan Pathfinder is an underrated and under-discussed SUV in my opinion. The model has certainly softened over the years, having gone from a hard-nosed 4×4 to a comfortable three-row family crossover, but just the same name continues on in the lineup right along with other veterans like the Z, Maxima and Sentra.

Summer means family road trip in our household, so I decided to see with Nissan Canada if a Pathfinder equipped with a towing package was available for a 2,500+ km trip, a distance a bit longer than the 500 km or so we’re usually “ allotted” for a conventional test drive. Of course, I would have preferred a hybrid model, if only to save a few extra bucks at the pump – especially in these days of 2-buck-a-liter gas – but there were no such vehicles available that could also take on my four-bike rack.

Also, the number of different stops along the way meant we had to carry a lot more equipment, including camping gear and even some games to keep the boys busy. In short, a vehicle with crossbars was the perfect candidate to host my INNO cargo box on the roof. I was delighted to learn that Nissan’s Pathfinder press model had those very bars on top of the panoramic roof of the Platinum trim.

Of course, the trip was going to be noisier and more gas-guzzling – a cargo box and four bikes behind the vehicle change the aerodynamics of a vehicle quite a bit, but in order to survive – nay, enjoy – these 10 days away from home en famille, the Pathfinder seemed like a darn good option for my second-ever tour of the Gaspé Peninsula. 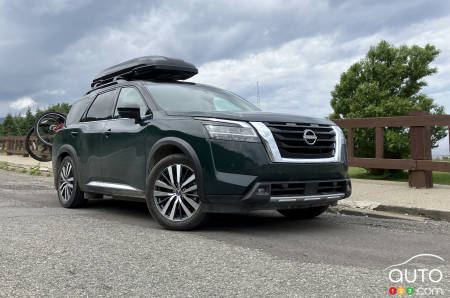 Before play comes work, of course: we still had to fill the vehicle with everything we’d planned to carry. Fortunately the third row of seats could be folded into the trunk floor, because otherwise the trip would not have been possible. Cargo space behind the pair of middle row captain’s chairs is about average for the segment, and there’s even a good amount of hidden space under the trunk floor to place a few extra items.

In the cargo box on the roof, I was able to put all of our lighter items like camping chairs, sleeping bags, etc.

Between our two junior passengers, the center console held a few books and even the portable video console, but with all the legroom there, we took the opportunity to drop an extra tote bag at their feet for other activities whilst on the road.

The first day of our journey to the Gaspé Peninsula went as planned with little to no trouble, although when I first backed the vehicle out of a parking space, the rear cross-traffic detection system manifested itself quite clearly, the device detecting in its field of vision four bikes attached to a steel rack.

After a few fruitless adjustments, I knew I was going to have to disable the system, and that meant doing that every time I started the car, because the system is automatically engaged every time the engine restarts. That’s going to be annoying, I said to myself. But after ten days behind the wheel of the Pathfinder, it was just part of the routine tasks at hand. Oh well, that’s the price to pay for having a vehicle that watches its perimeter at all times.

After a brief stop to see family in Lévis, our first stop away from the big cities was in Matane, in a hotel directly on the St. Lawrence River. No better place to spend a night whilst on the road.

This first stage showed us how comfortable the Pathfinder is, even when so fully loaded that the rear suspension sank a little lower than normal. This portion of the trip had been mostly on highway and the Gaspé Peninsula’s hills didn’t really much bother the SUV.

The result: the Pathfinder averaged just over 10.0L/100 km, impressive considering the official average (according to Natural Resources Canada) of 9.2L/100 km (highway) and 10.5L/100 km in combined driving… with an empty vehicle! 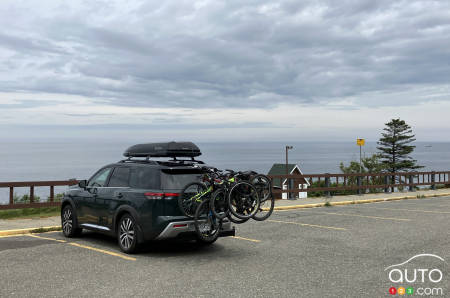 After two nights of sleeping with a roof over our heads, the third was more rustic as we sheltered in a “prêt-à-camper” in Forillon National Park, not far from the town of Gaspé. Shortly after leaving Matane, we introduced the Pathfinder to the region’s slightly more challenging climbs, a meeting that didn’t have too many repercussions other than a slight increase in fuel consumption.

I can confirm that the 3.5L V6 works much better with the new 9-speed automatic transmission. It feels more engaged and at high revs, Nissan’s 6-cylinder emanates a nice melody.

But then, a little hiccup. The front passenger-side window decided it was not going to close completely. What’s more, the forecast called for thunderstorms later in the evening. And since garages are far less plentiful in this remote part of the country than postcard-perfect houses, we had to pull a MacGyver and cover the window with a makeshift cover.

Fortunately, the town of Gaspé was within reach, and thanks to the efforts of the Roy Nissan dealership – the very next day – this little incident didn’t much affect the rest of the trip. The repair only took a few minutes and was covered by the manufacturer’s warranty. 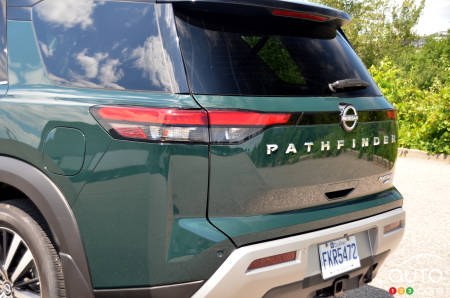