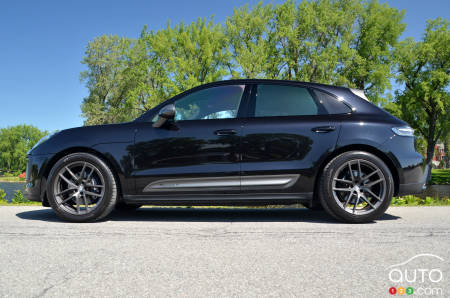 When I look at my shoe collection, I realize that it’s a pretty extensive collection. In addition to my sneakers for sports activities, I’ve got a pair of clean shoes for special occasions, other, more casual shoes and even an old pair of sneakers that I keep for cutting the grass or for dirty work around the house.

It was with this in mind that I approached this road test of yet another version of the popular German crossover. Because yes, you can own a Macan for every occasion! The Macan T (T for Touring) is new this year, and sits just above the base model and below the S model, which is powered by a twin-turbo V6 engine.

Sticking with the analogy, while the Macan lineup is made up of a series of sneakers, the Macan T seems to have been developed for the Olympics, with the badge sharpening the vehicle’s parameters a bit more, like a hyper-specialized sneaker developed for a particular sport.

This wasn’t my first time at the wheel of a T version (911 T, 718 Cayman T) so I knew a little bit about what to expect, although everyone save for maybe the designers of the model itself will agree an SUV doesn’ t offer the same kind of experience as a rear- or mid-engined sports car.

It should be noted that our tester came directly from Germany, despite the Ontario plates installed on the vehicle. The costs of the options, where noted, are those of Porsche Canada. 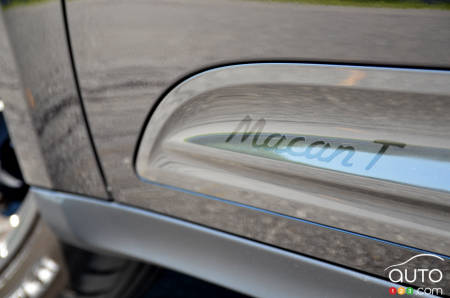 What does the T do for the Macan?
Before I share my driving impressions with you – because beyond the utilitarian aspect, the Macan T is above all a driving tool for purists – I have to explain what sets this variant apart.

First off, you have to pretty attentive to pick out the Macan T’s exclusive visual features. At the front, in the center of the bumper, the central spoiler is dressed in an Agate gray colour, which is also found on the mirror covers and the protective strips on the sides (“sideblades”, as the manufacturer likes to call them) . Note also that the rear spoiler, rear diffuser and badging are also painted in this color, as are the 20-inch wheels borrowed from the Macan S for the occasion. The details blend well with this Intense Black Metallic body (not to be confused with the standard Black color of the model).

Inside, the half-leather, half-fabric Sport seats are standard equipment, and they do their part to keep front-seat occupants in place as they careen their way through sharp turns. The striped fabric in the center of the seats – dubbed the Sport Tex Stripe, if you please – looks great in the all-black cabin, as does the brand’s crest engraved in the leather headrests.

The multi-function GT steering wheel in Alcantara suede is also an important part of the show, although I found it slippery at times. Driving gloves would almost be recommended here, because to enjoy such a comfortable steering wheel and precise steering, there’s nothing better than having both hands glued to it.

And for those who like to track the evolution of the brand’s most agile crossover, know that the dashboard is now equipped with a vast 10.9-inch touchscreen that proves very responsive with graphics worthy of Porsche’s standards. 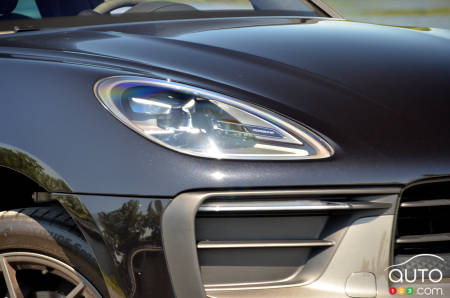 The kicker…
Really though, it’s the inclusion of PASM (Porsche Active Suspension Management), which lowers the chassis by an additional 15 mm, that more than any other element distinguishes the Macan T. Only this variant can be had with both this feature and the steel spring suspension. In this case, however, the vehicle had traded in its springs for an air suspension ($1,590) that lowers the ride height by an additional 10 mm. At this low level, I must add that the Macan T almost feels like a family car. On the other hand, at its highest level, the vehicle looks ready for a gravel trail.

The Sport Chrono package is standard equipment, as is the PTM (Porsche Traction Management) system, which was designed to promote a rear-wheel drive feel. Engineers also beefed up the front anti-roll bars, which stiffens the vehicle somewhat. The PTV Plus (Porsche Torque Vectoring Plus) system, which works in conjunction with an electronic limited-slip differential to provide even more grip on the road, adds another $1,700 to the bill. 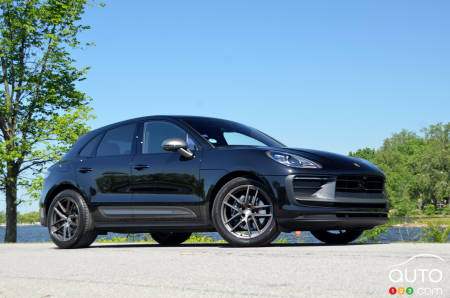