There are two types of concepts in the automotive world: those that foreshadow a production model, and design studies that look to the future and will never be produced. Enter Lincoln’s Model L100 in the latter category as Ford’s luxury brand shows us what a future self-driving electric vehicle might look like.

The study is being shown as part of Monterey, California’s Car Week activities. It also serves to celebrate 100 years of Lincoln as part of the Ford automotive empire. While the company was actually founded in 1917 by Henry Leland, it was acquired by the American giant five years later.

The L100 concept features aeronautically influenced styling, advanced technologies and an interior that clearly shows that it is a self-driving vehicle. The cabin is built around an interactive center console and three rows of seats accommodate six people, with the second and third facing each other.

Lincoln of course refers to revolutionary components making up the vehicle’s propulsion and various systems, but did not provide many details. 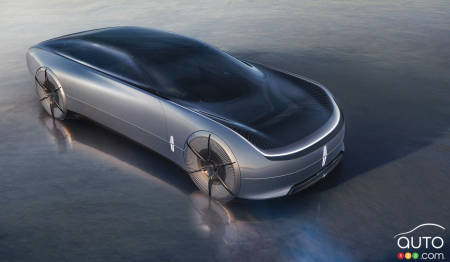 The design of the product, it must be said, is spectacular, pure and futuristic. In addition to the seductive styling, the model is equipped with some pretty eye-catching elements, such as the wheel covers with a lighting system and sensors to indicate movement, battery life and human presence, or the illuminated strip around the vehicle. The Lincoln logo and name are also illuminated. And when someone approaches, the car triggers a “symphony” of light that follows them around the vehicle using an artificial intelligence system and GPS sensors.

The way the L100 concept gives access to its cocoon is also special. In fact, the entire car opens up like a flower in full bloom. The glass roof lifts up from the front and the extremely long rear-hinged doors open wide for easy entry and exit. 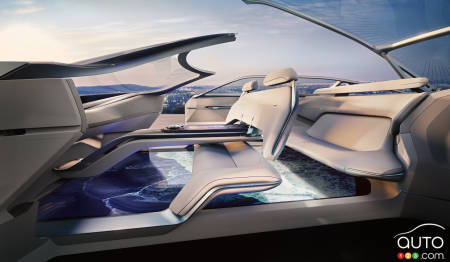 Eco-friendly materials line the cabin, and the company mentions that none of them are animal-based.

Another thing the L100 Concept is, is a tribute to the 1922 Model L. A crystal greyhound figure, sculpted to match the original car’s hood ornament, is visible through the transparent hood.

As always with this kind of concept, it will be interesting to see if any of the elements ever migrate to a production model. 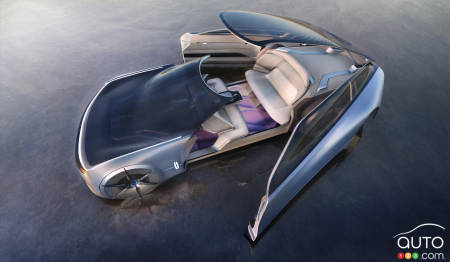